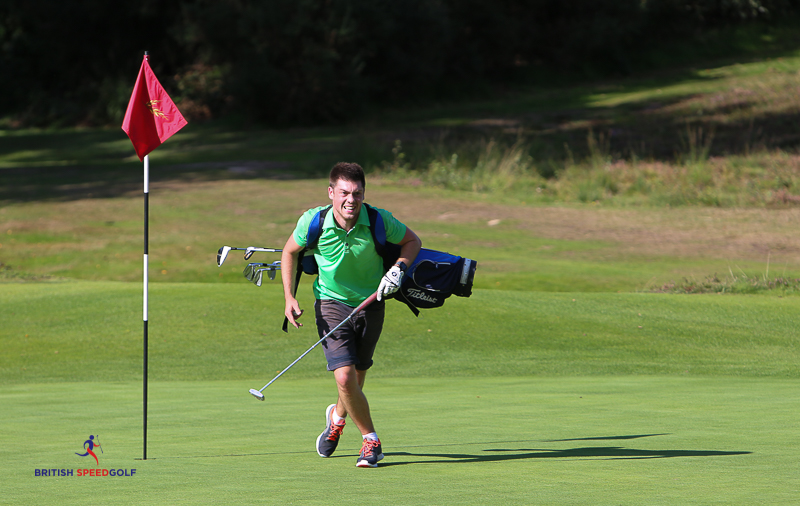 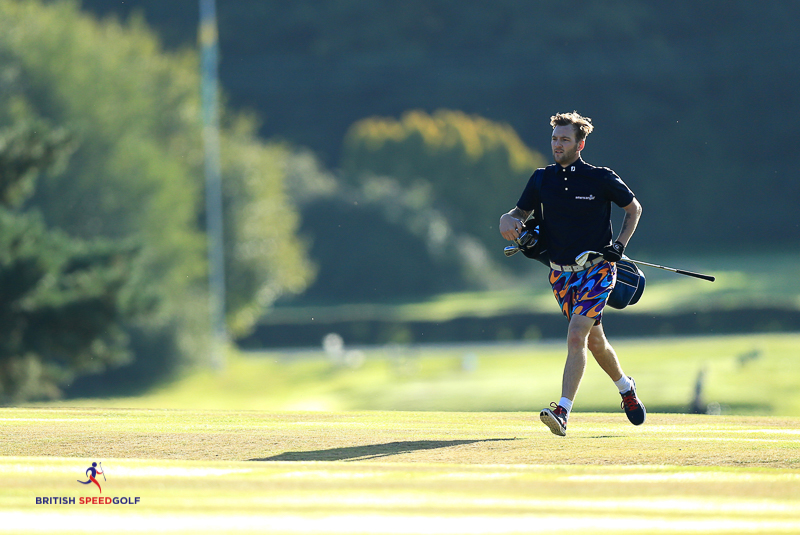 A cool but bright autumn morning greeted competitors at the British Open Speedgolf Championships. The Course at Piltdown Golf Club was in splendid condition and even more striking since the bloom of the heather that gave a purple pink hue to the course. Despite having no sand bunkers, this course is challenging for golf, the heather is the main hazard where golf balls quickly disappear out of sight. 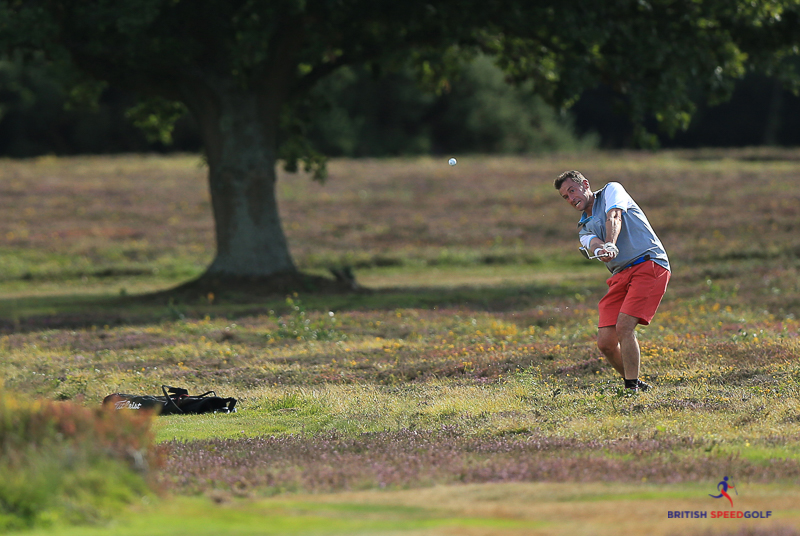 This year included an International field with players from Australia, New Zealand, France and the USA. The Championship opens with an appropriate running start with competitors set off individually at 6 minute intervals. Normally an average round here can take four hours, but today things were much, much faster with the top 3 placed men finishing 18 holes in under 50 minutes, golf at full throttle! 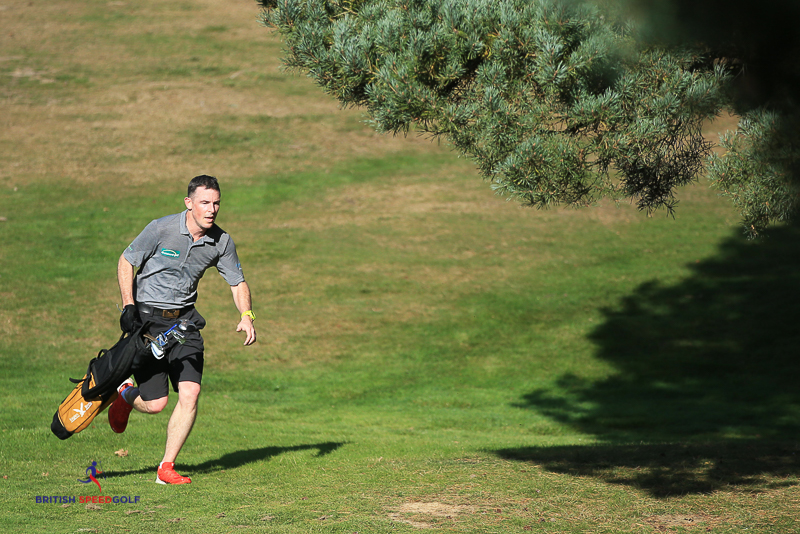 The fastest players were set off first, to give all the optimum chance for a clear round. Playthroughs are part of the fabric of Speedgolf tournaments and some like the thrill of ‘hunting down’ the person in front. This athletic format is an adrenalin filled sport, but the challenge is balancing optimum pace whilst retaining golf performance. The course was in splendid order, but proved harder than last year, due to the super fast greens, which caught out even the PGA Pros. Putting, is especially hard in Speedgolf whilst controlling an elevated heart rate, so it was no surprise that putting this year bumped up the golf strokes.

A Speedgolf score combines the total shots taken (plus any penalty shots) added to the time to complete the entire 18 hole golf round. In the main Men’s championship, the Top Flight, it was an intense battle for the title, the margin between the top three was very tight but Chris Benians did enough to defend his 2017 title and seal the victory;  he shot a round of 80 in just over 43 minutes giving him a Speedgolf Score of 123:21.  Runner up was Australian PGA Pro James McMaster, he only started playing Speedgolf this year but is already hooked and challenging those at the top of this sport. 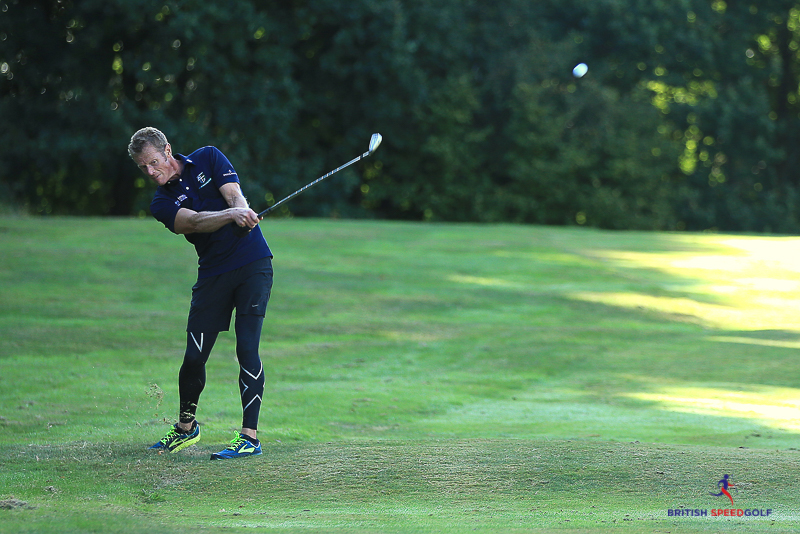 In the Ladies division, defending champion Elizabeth Taylor was overwhelmed by Liz Mckinnon who is a Golf Pro and seasoned Speedgolfer from New Zealand. Liz shot 76 in 50 mins 41 seconds giving her a Speedgolf Score of 126:41. Liz is trailblazing this faster golf format proving that women too can pick up the pace; indeed she was only marginally off the men’s pace. Runner up was Mariette Hilborne whose sprint finish on the 18th left the men in awe. 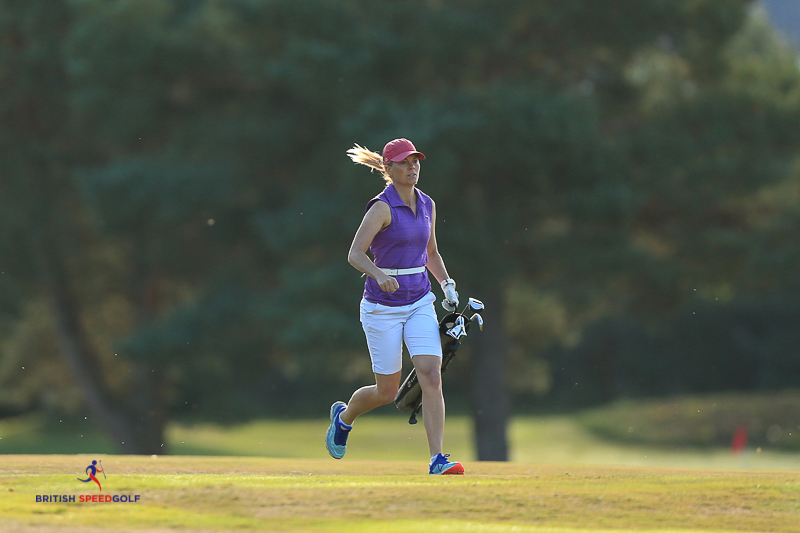 In Speedgolf, it is passion and the thrill of the challenge that drives success; there was no prize purse for the winners but something far more valuable, the accolade of becoming a British Speedgolf Champion. Speedgolf is much more physically demanding than traditional golf, but also delivers greater fitness benefits. 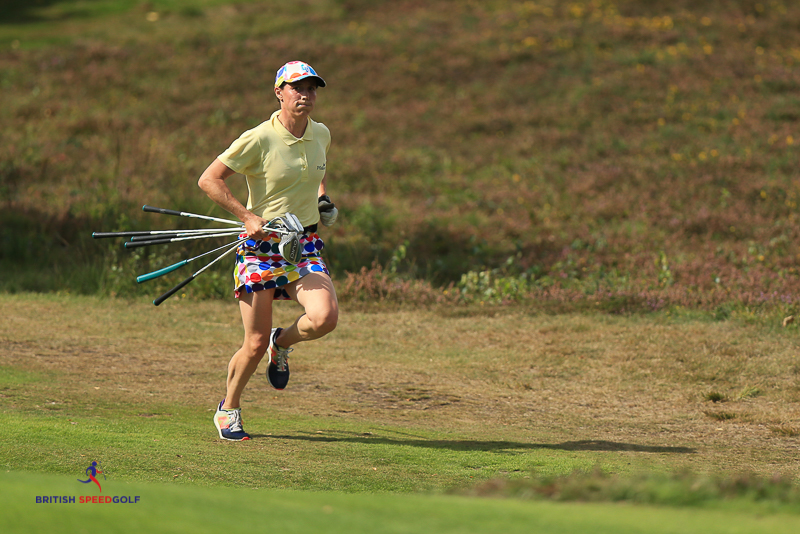 Great golf is at the heart of Speedgolf so it was no surprise that the most accomplished golfers prevailed. However, slightly less experienced Speedgolfers in the Amateur class and tournament first-timers in the Novice class are catching up fast and the best way to improve is to play more Speedgolf, put simply Hit, Run, Repeat!